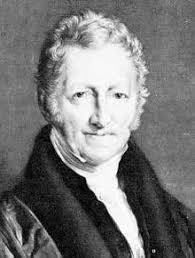 Image of Malthus; linked from Wikipedia

If the world’s population is allowed to grow unchecked, there will come a time when the planet cannot sustain those who inhabit it.  Simple extrapolations of population growth, coupled with measured analyses of the rate of growth in food productivity, will show that there is a point at which productivity will fall below minimum demand.  Famine and the attendant response to it are among the results one would expect.

Instead of devoting our energies toward finding solutions, there appears to be an increasing need to discredit “deniers” who seems to suggest we just need to have faith in humankind’s ability to overcome every obstacle.    This might not be so important if it weren’t for the fact that some of those who argue against scientific logic and reasoned extrapolation seem almost persuasive…if only their words, and not their logic, energizes the debate.

There is danger in assuming eloquence to be based in knowledge and reason.  A forcefully expressive and persuasive orator or writer is not necessarily one who speaks the truth.  He or she may simply be a highly skilled liar or someone who excels at building magnificently worded, and utterly empty, arguments.  Robert Zubrin, the author of Merchants of Despair: Radical Environmentalists, Criminal Pseudo-Scientists, and the Fatal Cult of Antihumanism is in my opinion among those whose arguments are empty, supported only by his own odd interpretations of “facts” to which he, alone, may be privy.

I believe Zubrin is a skilled writer with a facility for specious arguments.

The book includes a well-orchestrated set of what I consider utterly absurd arguments against the propositions put forth by Thomas Malthus in the late 18th and early 19th century in connection with the need to establish mechanisms to control unrestrained population growth.  Aside from his pseudo-scientific accusations against what he calls the pseudo-science of theories about the impact of global warming and explosive population growth, among other things,  the assertions I find most disturbing are Zubrin’s zealous attacks on well-reasoned science and his utter dismissal of even a legitimate concern about overpopulation.

Like so many others who decry rational science in favor of irrational, politically-generated “faith,” Zubrin ignores or dismisses without basis, the work of the majority of scientists with whom he disagrees.  Zubrin’s irrationality is in clear view in an article (entitled The Population Control Holocaust) published online in The New Atlantis, in which he states:

If the idea is accepted that the world’s resources are fixed with only so much to go around, then each new life is unwelcome, each unregulated act or thought is a menace, every person is fundamentally the enemy of every other person, and each race or nation is the enemy of every other race or nation. The ultimate outcome of such a worldview can only be enforced stagnation, tyranny, war, and genocide. The horrific crimes advocated or perpetrated by antihumanism’s devotees over the past two centuries prove this conclusively. Only in a world of unlimited resources can all men be brothers.

That is why we must reject antihumanism and embrace instead an ethic based on faith in the human capacity for creativity and invention. For in doing so, we make a statement that we are living not at the end of history, but at the beginning of history; that we believe in freedom and not regimentation; in progress and not stasis; in love rather than hate; in life rather than death; in hope rather than despair.

The emphasis added above is mine. I simply cannot understand how anyone can do anything BUT accept the idea that earth’s resources are fixed.   Zubrin twists the matter even more when he asserts that those who do accept the concept of fixed resources also accept that every person is the enemy of every other person.  His use of a bizarre false syllogism would be humorous if it weren’t so frightening.  A scientist who asserts, as does Zubrin, that any evidence or line of reasoning proves anything “conclusively” may be a bit unfamiliar with the scientific method. What makes Zubrin’s public assertions about the illegitimacy of population control so frightening to me is the fact that he has educational credentials that are impressive, though those credentials signify nothing in the way of expertise on the topic of .  Wikipedia has this to say about Zubrin: “Zubrin holds a B.A. in Mathematics from the University of Rochester (1974), and a masters degree in Aeronautics and Astronautics, a masters degree in Nuclear Engineering, and a Ph.D. in Nuclear Engineering — all from the University of Washington.”

Zubrin cleverly states as fact a number of opinions, most of which have long since been discredited, that support his contentions that people who are in favor of developing reasonable, fair, and workable means of population control are “antihuman.”

No reasonable person today would claim that everything Malthus asserted was true and correct.  But Zubrin exploits the fact that some of the arguments posited by Malthus were incomplete or erroneous, condemning Malthus’ entire hypothesis about population.   I suggest that no reasonable person today would claim that the solution to aggressively misused and dwindling resources, along with a growing population, is simply “faith in the human capacity for creativity and invention.”  I applaud those who have faith in humanity, but it is delusional, in my opinion, to view reality through a rose-colored lens created from magic dust and wishful thinking.

Malthus asserted that unchecked population growth would quickly lay waste to available resources; while that did not occur as quickly as he envisioned, the reasoning behind his arguments remains valid.  There really are limited resources available to humankind.  Unless reasoned arguments about ways to control population take place and unless steps are taken to implement the steps that have the greatest likelihood of giving humankind a long-term solution, we will continue to rush headlong into the eventual global catastrophe that Malthus anticipated.  Zubrin argues that anyone who accepts the urgency of the problem and wishes to solve it is “anti-human.”  I argue that Zubrin, and those like him who attach political motives to scientific problems, is the one who should look in the mirror when uttering that word.

Several years ago, I used the phrase “new Malthusian imperative” to argue about the need to have serious public policy discussions, based on science, about population control.  I still believe there is a new Malthusian imperative facing us as a species. If Zubrin and his adherents believe what they are saying about the SCIENCE of the matter, then they should be willing to debate other scientists, using only demonstrable data to fuel their arguments, leaving accusatory labels and magic dust back at home where they belong.

OK.  This might not be your thing.  I can accept that.  But I hope you will accept that what I have written here expresses my opinion…what I believe to be true.  I have strong opinions about a lot of things, some of which are pretty sketchy in terms of supporting data (this isn’t one of those).  I am open to argument, provided those arguments are based on defensible information.

"Love not what you are but what you may become."― Miguel de Cervantes
View all posts by John Swinburn →
This entry was posted in Demographics, Economics, Essay, Philosophy, Religion. Bookmark the permalink.

4 Responses to The New Malthusian Imperative