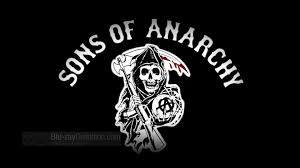 The depth of my enjoyment of the FX network’s Sons of Anarchy series surprised me. The show revolves around a California motorcycle club involved in gun-running, drugs, pornography, and other sorts of illicit activities that have no place in my mainstream, middle class life. It’s an exceptionally violent program that is unafraid to push the limits of taste in showing blood, severed heads, and close-ups of gut shots and dismemberment. There’s a lot not to like about the series.  But I quickly became addicted to it.  It is now into or through its sixth season on FX, but I only began watching it a couple of weeks ago, getting access to it through Netflix streaming.  But Netflix limits availability to the first four seasons.  I’ve burned through them; I NEED to see season five and six…I NEED to be caught up so I can watch it weekly as new episodes air.

What is it about the program that is so appealing to me?  I think part of it is the fact that the son of one of the club’s founders is conflicted about his role and the club’s role.  The father became disillusioned with the direction of the club and wrote about his disillusionment; the son read his father’s words and began to understand his own conflicts about the “life” of the club.  The acting is top-notch, as well.  Most of the characters, people who do despicable things, are portrayed as bad people with enough good, human qualities to merit some sense of affection for them.  And the action…the suspense…the heart-stopping pace and startling plot twists…it’s all exceptional!

If anyone who happens upon this post knows where I can get my hands on, either via DVD or streaming, season five without paying an arm and a leg, please tell me…I will shower you with affection.

"Love not what you are but what you may become."― Miguel de Cervantes
View all posts by John Swinburn →
This entry was posted in Television series. Bookmark the permalink.